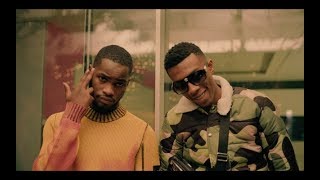 Daniel Avery, Glass
Sam Davis
DirtyWork
DirtyWork Pass the Pen
We wanted to know what the new roster was like at DirtyWork, Rattling Stick’s new platform for emerging talent. So we got the six initial directors - Sam Davis, Harry Barber, Pilgrim, Amar Hernández, Eve Mahoney and Nathan James Tettey – to do their, er, own dirty work. The rule was that each director quizzed the next director ten questions until they’d gone full circle.

All work and no play makes Harry a…

an annoying person to hang out with…

Worst place you’ve ever been?

I was sat in the Uzbekistan embassy recently whilst they looked for my passport which they’d misplaced… It’s a well nice building but for visas they send you into this little dungeon down the side. Pretty grim.

How old were you when you first made a film?

Besides the jackass stuff we used to shoot on my Nokia 7600 (the diamond shaped one) maybe I was 15. A short stop motion film with foil and play dough.

How rubbish was it?

I was kinda chuffed with it at the time!

If you could make a video with unlimited freedom and budget, for any track in history, what track would it be?

Nelly ‘Ride With Me’ – I’ve kind of always had a fantasy about making one of those jokes R&B or Rap videos from the 00s. Alternatively, any track from Watch The Throne.

Are there any brands that you have a ‘personal’ connection to that you’d like to work with?

Would you rather eat a century egg or a neon sign?

Sash or Chicane? (this is esoteric film shit).

My nan was looking after me and my twin sister one day and, for some reason, had Kevin & Perry on VHS. She put it on for us. We were about 10. I’m not sure she knew much bout the film before she put it on.

How many people are there in Harry Barber?

Are you a Barber?

I hate having my hair cut. I can’t imagine I’d enjoy cutting it.

What do you waste your most time on?

What don’t you do enough of?

What word do you overuse?

You have full creative/budget freedom with a brand’s visuals. Which brand do you go to town on?

What’s the luckiest thing that’s ever happened to you?

Finding a well stocked bumbag at a festival at a time when I had no money whatsoever.

Which music video should have a better video?

Cardi B – I Like It. i was hoping for it to be set on a yacht, shot on anamorphic lenses like Jay-Z’s Big Pimpin but it looked like a Primark ad.

You’re handcuffed to a celebrity for one week. Who?

What are you currently worried about?

Being patient and knowing when to pick your battles. As a commissioner you can see very early on why directors can feel like the world is against them when trying to create something but that’s because you can’t make everything a battle. If you do you’ll just kill enthusiasm for your project with your team and with yourself. Being patient and knowing when to fight for what you want when you actually can is key to building a good project and team in the long run.

At the Rattling Stick Birthday Party, I gassed you about the feature film idea, very drunkenly. If it helps your memory, I was sporting a shaved head. Sum it up if you can remember. lol!

I have no memory of this idea…..please remind me I was drunk too.

What’s ur meal at death row?

White Rice, Lamb Stew and plantain all cooked by my sobbing mother before they flick the switch…..

If your childhood was a kids’ movie, what would it be and why?

Home Alone, I’m an only child, my mum was away a lot travelling the world and I would stay with my grandma who worked. I was very self sufficient and could take care of myself at a young age. I looooooved getting up to mischief and would always end up getting in trouble.

You’ve wound up spending an evening with new girlfriend and your ex. What film would you put on to soothe the awkward moments?

Singing in the Rain, it’s the most fun film, is really sweet and has tons of charm. It would soothe all awkward moments.

I think Question Time is so sick because you prioritised Dave’s message over any faff. It’s unapologetic and direct. The visuals enforce his clarity.

Thank you, you’re very kind. That was the point of keeping all the focus on him. He’s a captivating performer anyway so adding a narrative thread or too many bells and whistles would of taken away from what he had to say which was the most important part.

Do you have a favourite activist? If so who are they and why?

Nelson Mandela, he had it hard and somehow came out of prison after 24 years without a bitter heart. Legend.

You’ve got ultimate monies to live in one brand of clothes for the rest of your life, what brand are you going for?

Classic Versace, I’d put on weight and try and look like Biggie. See picture below. Nas, have you heard the new album?

Where did you grow up and where would you like to grow old?

I grew up in NW10 but went to school in south east London so I have a soft spot for pretty much all things South. I’ll grow old in London as I love it too much to leave entirely BUT growing old in either Fiji or the Cook Islands would be a vibe.

Well, music inspired me to make music videos but the first ones that I remember watching were: Spin the Black Circle from Pearl Jam, Give it Away from Red Hot, or Smells like Teen Spirit from Nirvana. Then I discovered Michel Gondry, Spike Jonze, and Jonathan Glazer.  Let Forever Be from Chemical Brothers could have been a real motivation.

What brand in most recent years has made some content that has inspired you? i.e Nike’s Write the Future really made me want to make football commercials.

I also loved the Sony campaign Color, Like No Other.

How do you create the “realistic” atmosphere in your work?

I don’t know, I suppose that it happens when you find the perfect cast, it’s really important to me to work with natural and patient people that allow me to try different things to get the good take. The DoP, the location, and the light are important too because they create the atmosphere.

What is you strongest piece of work to date?

What did you find challenging early on as a filmmaker?

I felt the necessity of filming the skateboard scene of my city, it was something innate.

Soon I realized that you should have a lot of patience and employ a lot of time to get something worthy, but I liked the final feeling.

Do you have ambitions to make a feature film and what kind?

Yes, in fact I´m writing a script now but it’s hard. It´s a mix of black humour/drama and road movie.

What genre of film do you enjoy watching?

I love road movies and thrillers.

With the DoP, we share the “searching of light” feeling.

If you HAD to make a film would you write something original or work a book or remake something?

Why do you always have boobs pop up in your videos?

Hehe… You can see nipples of both genres in my videos, equally, I try to normalize that. On the other hand, I think that is a beautiful symbol of freedom.

I am Sam Davis. I am skinny and pale. Almost see-through actually.

What do you like/hate the most about your job?

What do you think about the Brexit?

Who would be your favourite artist for making a music video?

Probably some 90’s rock band. Videos back then were absolutely mad.

What´s your dream in life?

To live on a farm where all my friends are animals.

Ermmmmmmmmmmm I actually have no idea.
The last doc I watched was Recovery Boys.
It follows four men at a farming-based rehabilitation centre trying to overcome their drug addictions.
Nice film.
I have no idea why I am talking about farms so much…

Do you believe in god?

I used to. Actually, I used to work for a church back in my hometown. Don’t know what I believe now.

Have you been to Spain? Where?

I have been to Barcelona for work twice. Incredible place.

Don´t you think that the “brands” question is terrible?:)

Who is your favourite filmmaker/movie?

Anthony C. Ferrante – his whole back catalogue is exquisite.

It’s a name we use for three mates making films together. It sounds better than our actual names. Please let us know if you think of a better one.

Rik: The final frontier. Let’s go.
Joe: Space is interesting, the science bit. But it’s also a really annoying word everyone in east London is overusing. ‘Good pub?’ ‘Yeah great space.’ Or when you’re on a location recce ‘This is a great space’ (when in reality you’re in a dilapidated toilet or something).

When you are old, what do you think children will ask you to tell stories about?

What is was like before the Internet and Brexit and robots. The good old days.

What are you thinking right this second?

Joe: Is the internet capable of dreaming?
Rik: Tea or Coffee?
Ad: Food.

Joe: Question above.
Rik: I don’t know why but I recently told Joe that someone we went to uni with had moved to LA and was a really successful film journalist, I’m not sure why I lied to him or where this fiction had come from, I even believed it myself; Joe searched her online curious of her success, she actually works for a bank in India???
Ad: The pen is red.

Have you ever punched anyone in the face?

Rik: No, Not sure if I am happy or sad about that?
Joe: No.
Ad: Yeah, a friend at school asked me to (Back in the days of Jackass and Dirty Sanchez).

Last time you were embarrassed?

Rik: I’m thinking hard for this one, I’m not sure.  I think I feel awkward way more than I feel embarrassed.
Ad: I just threw my lunch all over my shorts, got them really wet trying to clean it off and now I need to leave my office, either in really wet shorts or in my pants. I guess that could get embarrassing. I’ll find out. Listen to The Power Gabriel, you ARE joking?

Saying so much in a small way

Stars of the game

Replicating the rhythms of real life