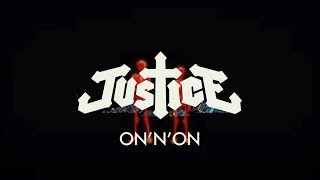 Where were you when the first seed of the idea happened and how did this evolve?

The idea was to make a one shot sequence, tracking forward, about Vanitas.
We shot a maximum of objects that would refer to the song theme and lots of ideas evolved on set with the band.

What was the brief from the band?

As a trained graphic designer there’s a strong graphical element linked to the sound in some of your previous work like White Stripes’ Seven Nation Army. Did Justice choose you for this graphical wizardry?

It might have helped.
They might have liked some of my works.
That’s something we didn’t talk about, you should ask the guys directly 😉

The amount of elements to shoot and the post production puzzle.

While you were making this video did any ideas occur to you that you’d like to fulfill in future work?

You spent ten years in a working partnership as Alex and Martin. Do you miss the camaraderie or is it a liberation?

It is a liberation.

Music Videos or commercials – which do you prefer?

It’s not the same goal.
Of course music video is artistically free.
In the commercial world the main advantage is to use techniques and to have the ability to make things big. Five of the best music videos and one spectacular film