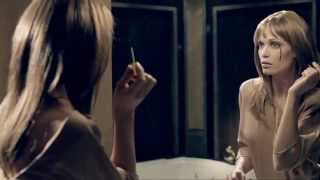 Director Ryan hope has an eye for marrying style with substance, mashing the best of fashion film with the gritty edge of music videos and adding a splash of documentary rawness for good measure.

With a reel that includes promos for the likes of IBLAMECOCO and Alpines (see Related Content), Hope probably wouldn’t be the first name you’d attach to a George Michael commission. But that’s where you’d be overlooking the twist to his tale. His lens has so far wandered over the highly tattooed and body-modified flesh of real world subjects in the acclaimed docu-short Skin and brought blood to the eyes in his recent commercial for Corsodyl. Diverse? Yes. Focussed? Always.

As his new promo for White Light by George Michael hits the net (did we mention it features Kate Moss, a zebra and a party scene in a desert?) OnePointFour spoke exclusively to Hope to find out more.

Who are you and where do you come from?

I’m a film director originally from Sunderland. I moved to London five years ago after studying Fine Art in Leeds. I say studying extremely loosely. The only thing I was studying was the city’s relentless nightlife, really.

Last things first – George Michael, Kate Moss and a zebra?! How the hell did the White Lights promo come about and can you talk us through the development of the idea?

I was just finishing my first music video in LA when a commissioner called me to say George loved my reel and wanted me to do a video for him. I was quite surprised he would approach me to do a pop video for him as I didn’t really think I would be his style. Quite often when you get tracks in from huge artists they never come to fruition so my gut instinct is not to get too excited about them. However, this one became very real when I had a voicemail from him the next day. Pretty funny one too. I wrote an idea based around George’s experiences whilst unconscious on morphine when he very nearly died last year. The five minutes before he wakes up is essentially the pop video. It’s a bit of a trip.

The shoot was what I can only imagine it was like being on one of those proper old school 90s videos. I’m from the generation where we missed all that. It was huge and had everything. George is a proper artist too. A bit mad, a bit genius and a bit normal. The shoot was exactly like this. George nailed his takes like I’ve never seen anyone do. Kate Moss in the woods at 2am on 35mm was as rock and roll as you want to get really, so I made the most of it and so did she. She was brilliant. The first cut I did for George was way too dark, and even though it was the original idea, he decided to add more ‘joy’ into it. He had this idea of him surrounded by loads of hot Spanish looking people. He’s very specific on certain things which I had to work around, but I really enjoyed the challenge, and I always like working collaboratively with people who really care and who are talented, which he certainly is.

There’s a strong styling element that runs throughout your films – from Tinashe through to your latest for GM. What is it you enjoy about that attention to immaculate detail?

Behind the artists you work with on your promos there’s always a really intriguing range of supporting characters. How important is the casting process to you?

I love casting. It’s my favourite thing to do in the whole process. It’s so important. I feel I nailed the casting in my Mona and Bombay Bicycle Club videos. I watch them proud of the casting to be perfectly honest. To think the blind guy at the end of the Bombay Bicycle Club one will never see himself in the video really choked me on the day. Pretty amazing stuff. I cast most of the people for the tattoos in my ‘Skin’ film also, and got those guys from all over the place. Casting is the most exciting part of it all, it really is. It’s only then that your idea really starts coming together.

Do you have a DP you tend to work with? If so why is that relationship so important to you?

I work with all different ones, totally depending on the project. I don’t work with ones who have attitude problems. In fact, I don’t work with anyone who has an attitude problem. I’m really big on that. When people in this country are cleaning toilets for a living, I insist everyone I work with is there for the right reasons. My regular collaborators are DoP Tony Miller and editor Ryan Boucher, both as good as they get. Relationships are essentially the key to your work as a director. My producer is Laura Jones who is amazing also. It’s incredibly important that the people around you share your creative vision without you having to spell it out.

You’ve got a quote on your website from filmmaker Michael Haneke – Art without humanism is a contradiction in meaning. What does that mean to you and how has that philosophy influenced your work do you think?

It influenced my work immensely. It’s the motto I work to, even if the people around me don’t. The point is emotion. If your work has no emotion, it’s not art, it’s just work. You gotta hate it, love it, be frustrated by it, whatever. For me, art is defined by emotion. I’m pretty hard line on myself about my work on this ethos. Even now I look down my reel and pick it apart. I don’t think I’ve made anything that is brilliant just yet. I will over the next 12 months though. I’m feeling very motivated by work at the moment, even though my reel is made up of my worst ideas.

I wrote this idea about a coked up gay catholic priest with a troupe of choir boy dancers recently, full-on choreo number, in a church in Detroit, everyone with post halos. At the end of the video God tells him he’s gay and is on drugs too, and not to worry about it. I opened the treatment with that Stephen Fry intelligence debate thing. To me, that’s art. Something with a middle finger and a smile or a scream. I’ve still not made this yet, no one has the balls to go for it. So if you’re in a position of power at one of our fine record labels and wanna make it, let’s do it. I’m ready to go. I’ve even cast it!

Your Alpines “Drive” video is totally different stylistically from the rest of your reel. What was the impulse behind taking the video in this direction?

It was a heavy collaboration from the band really, who I still collaborate with to this day as I genuinely love them. We worked together on the idea, but the video only really came to life in the grade, as most of my work does. I use grades like edits. I was in Nashville doing Mona when I was asked to pitch on ‘Drive’. I wrote the idea whist on the shoot based on their brief. I’m currently working on their new video ‘Lights’ which is probably one of the best records i’ve ever heard, ever. Like them, it’s 110% totally proper. I make music myself and am heavily into music in a big way so hearing good music is what really motivates me to do what I do.

Where do you look for inspiration?

Absolutely everywhere, but a lot of it comes from experience, my own or of my friends.

Are you working on any other projects at the moment that you can tell us about?

I’m working on my first track actually. I’ve been learning how to make music the past year. All very geeky.