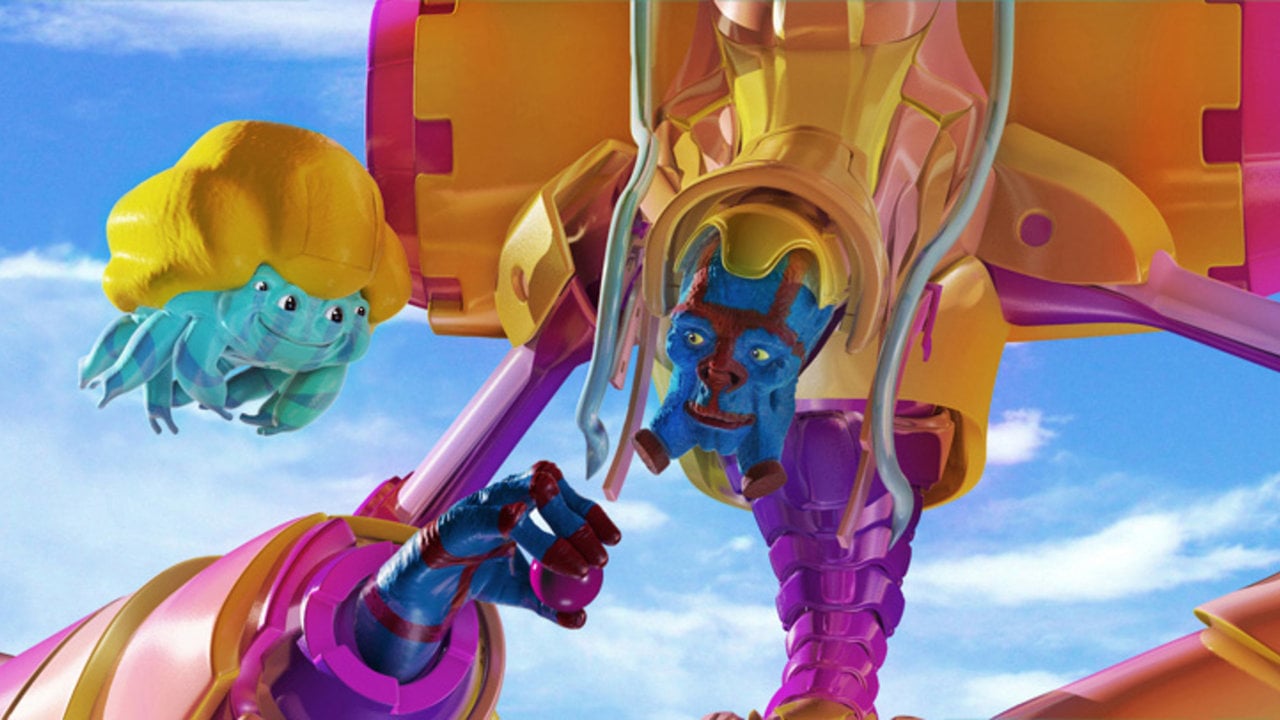 Did you work closely with MTV creatives or were you given an open brief?

The great thing about working with MTV is that they’re pretty open to any idea you pitch at them as long as it’s good. Definitely an open brief.

How did you develop the idea?

I’d been craving to shoot live footage. So I took advantage of this opportunity and went to film on my own during the weekend after their proposal came in. The following Monday I pitched the idea of merging two eccentric characters into a live background, and MTV said ‘Yes’.

What were the main challenges of making MTV Top 10?

Character craft is always a new challenge for us. But since that’s what we are good at, I’d say filming the footage was the leading challenge.

The characters are so intricate and loveably wonderful – how did you go about designing them?

Their concept was based on members of aborigine tribes native to Argentina. We occasionally like to go out on a limb and pepper our work with a little bit of national culture; we like to think it adds a tad to our identity. Also the book Not A Toy by Pictoplasma provided a great deal of inspiration to the design.

The sound design is intriguing – was this created afterwards or was it always part of the film from the beginning?

It was created afterwards and it’s by Kungenochhertigen.

Storyboards were based on the film footage. Once that was in order, we faced a delicate procedure of animating gestures, glances, looks, and minimalistic action. Our objective was to narrate with subtlety the connection of both characters.

And what’s your favourite part of the process?

For me, giving birth to new characters is a staple for pleasure. Also, filming the footage, simple as it was, turned out to be a pretty cool experience.

We love the floating, hazy, fun summer’s day within the park environment.

It’s this lovely park called Bosques de Palermo, it’s in my neighborhood in the city of Buenos Aires. Beautiful sunsets.

Bright beautiful colours seem to be a feature of your work. Do you enjoy playing with colour?
Of course! Who doesn’t? Our direction always includes an incontrollable impulse towards the abundance of colors. Life is color.

How would you describe the work culture at PepperMelon?

I’d say it boils down to one phrase:
“Learn from everyone, follow no one, watch for patterns, work like hell.”
– Scott McCloud

What’s your background in films and animation? Have you always lived and worked in Buenos Aires?

No, I was born in Bahia Blanca, a city nearby Buenos Aires, and moved here when I was 18 to study film. After working five years in the advertising business, and in postproduction for the film La Antena directed by Esteban Sapir, I met my partner, Fernando Sarmiento, and we founded PepperMelon.

Besides  MTV Top 10 what other pieces of work are you most proud of and why?

Most recently, fIRST, a short film we produced for F5 New York. What we find so special about this project is that it’s our first short film that includes bizarre characters in a brief narrative. Also, we clocked the whole thing in two months! That was a sweat.

What inspires you creatively?

It’s funny how the answers change every time I respond to this question. Now, I’d say Mother Nature, limits, society, the connections between living beings, limits, and behavioral patterns.

What’s the best piece of advice about film-making anyone’s ever given you?

I wish I could say this piece of advice was spoken to me personally, but I cherish it nonetheless. “The first draft is nothing more than a starting point, so be wrong as fast as you can.” – Andrew Stanton

The world is your oyster – who in the creative film-making world would you most like to have a conversation with?

That’s a tough one. Though if I had to choose, I’d like to have a chat with John Lasseter and Stanley Kubrick. Each individually of course, I think my head would explode if I sat in a room with both of them.

Did you go to film school or are you self-taught?